Early Fine Art Dealers specializes in valuing and purchasing important paintings from the 17th century through the early 20th century. Our buyers are in constant search for fine works of art and paintings, spanning the globe for original well-known Old Master, European, American, and early California art. Each year we preview and participate in hundreds of private sales, art shows, gallery showings, exhibitions and auctions. We are in constant search for fine works to purchase. Please contact us today to discuss the sale of one of your paintings. Please note that our gallery only deals with original paintings. No Prints Please. 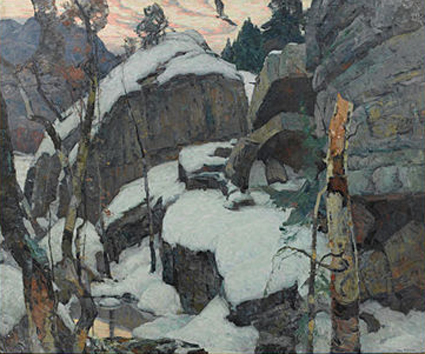 WE ARE DEALERS OF ORIGINAL PAINTINGS: To contact one of our gallery fine art experts about selling your painting or buying paintings for your collection, complete the form below. Please note that our gallery only deals with original paintings. NO PRINTS PLEASE.

After emigrating from Sweden at the age of ten, painter John Fabian Carlson's skills would be nurtured through an apprenticeship with a lithographer. He would then begin formal training at the Albright Art School under Lucious Hitchcock before heading to New York to study at the Art Students League with Frank Vincent DuMond and Birge Harrison.

It was Harrison who had the most profound influence on Carlson's life. His Tonalist palette would work perfectly with Carlson's fascination with light and shadow in the landscape.

He followed Harrison to the artist's colony in Woodstock, New York. It was here that the Art Students League summer program would be located due to Carlson's influence. Additionally, he would work in the Arts and Crafts movement at the Byrdcliffe Colony in Woodstock as well.

Carlson would have his first solo exhibition in New York City in 1909, and by 1911 he was elected as an associate of the National Academy of Design, becoming a full member in 1925. It was also in 1911 that he became the Director of the Art Students League summer school, which he remained until 1918.

At this point in his career Carlson had attained a great deal of recognition for his paintings and was offered the directorship of the Broadmoor Academy in Colorado. He served there for two years before returning to Woodstock, and opening the John F. Carlson School of Landscape Painting. Six years later he authored a text book on landscape painting which has been reprinted three times since 1928.

He exhibited widely throughout his career, with his final submissions taking place only a year before his death. His works are in many major museums including the Art Institute of Chicago and the Metropolitan Museum of Art in New York.

[ Back to Artists page ]